I did about 90 minutes’ work on the motor, using a pair of vise grip pliers to loosen the a stubborn bolt holding the water pump housing to the motor front plate. The same pliers were great for removing the water pump impeller cover screws; all but one were stripped and/or frozen. Next, I loosened the hose clamps securing the seawater plumbing and gently pried the cover off. The impeller had all its rubber vanes but there was a lot of build up on them and it was clear they weren’t moving. I was able to pry off the impeller, but the rubber piece separated from its bushing, which I removed separately. The motor still could not be turned at the crankshaft, so I will need to continue the disassembly.

I took another look at the Yanmar service manual, and see I am a good ways toward having the engine torn down. With the head already off and the intake and exhaust assemblies disconnected, it’s just the fuel pump, separator and a couple lines before the V pulley comes off, at which point it should be possible to remove the front and side covers from the engine and get a very clear view as to what has the motor siezed. I suspect at this point it is just the piston rings frozen to the cylinder walls, but worst case it could invlove the crank or camshaft. Time will tell. Then some informed decisions can be made about whether a partial rebuild or repower is most appropriate.

It will be a good project for this Saturday before I plan to do some stabilization of the trailer, and possibly pull the mast down on next Sunday. 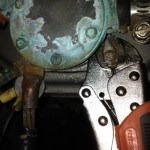 Vice grips get a bite on a corroded water pump screw where a box wrench failed. 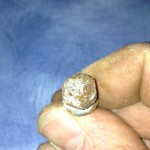 Here’s the corroded bolt. It started out as 10mm but worked its way down into the SAE range. 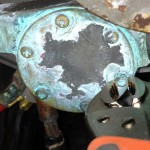 Vice grips grab onto small brass screws on the face of the water pump that and successfuly removed them. 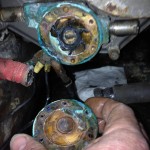 With the screws loose, the water pump cover was pried up. 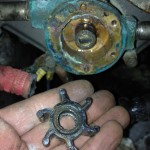 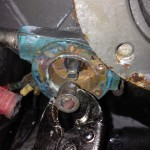 The keyed hub was pulled out with the vice grips.