I found one of these Makita right angle drills at the Restore in San Carlos a few months ago for $16.  It came with a charger and a couple batteries.  The batteries are the older Nickel-Cadmium (NiCd) chemistry, but it so happens my wife picked up a similar straight drill at a yard sale a few months before.

Right angle drills are very useful whenever you’re doing work in close quarters, which abound on a boat.  I must have done hours of remodeling with the same model, which I used to own about 20 years ago when it came out.  As it turned out the drill didn’t turn, although the batteries charged fine.  The problem was the thermal overload relay, the little rectangular fuse with the yellow button would not reset properly and stayed pushed in all the time.

I found the part online for about six bucks, but before I placed the order I made a quick test by shorting out the two electrodes and confirming the drill ran properly.  The part came in by post sometime late last year, but I didn’t have the opportunity to get everything together to fix it. Once I did this afternoon it took about 20 minutes.  Remove the half dozen black Philips head screws from the drill, carefully separate the case halves, slide out the old thermal cutout and use a soldering iron to carefully remove the old leads and transfer them to the new part with a little finesse, a pair of pliers and a splash of new solder.

The drill is back in commission and I’m looking forward to using it for some upcoming projects, like installing the pine ceiling along the walls of the aft cabin.

Kudos to the Restore folks, by the way.  When I informed them the drill didn’t work, Jamie knocked the price of the replacement component off the bill.  I paid shipping, and we both came out ahead! 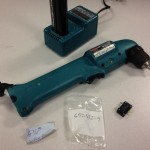 This right angle drill, circa 1982 is a handy one to have on your side in close combat!

I’ve often admired the look of teak decks.  A pair of our Los Gatos Yacht Club members have a Nautor Swan 44 that has sexy grey teak running the length of the deck. Great footing and beautiful to look at but it can be some effort to maintain.  Also the concerns about the expense and weight of teak, the countless holes that might be needed to produce a sprung teak deck, and the conservation issues; it makes you re-think!

Happily, a few European manufacturers have developed some synthetic teak products. Notably, the maker of FLEXITEEK offers in addition to their full service installations where they’ll come out to measure your boat and make templates, or have you send them in.  Then they heat weld together the teak material into panels, which they’ll either install or send back to you for installation.

Practical Sailor did an evaluation of the materials from a cost and installation standpoint years ago.  Most all of them are tongue and groove installation of material just a fraction of an inch thick that is glued along the tongue and shaped into patterns that conform to the deck.  Once connected together like a puzzle, they can be glued down using mastic-ky glue to secure them to the desired locations.

Since that time the cost of anything petroleum based has gone up pretty significantly.   I ordered some samples from the Florida-based ISITEEK distributor and show them here.  At first glance, even holding the material in your hands, it’s hard to tell it’s not wood.  Rather than just giving the surface impression of grain, there’s a fibrous texture that goes all the way through the material.  This stuff is available with two colors of “grout” lines, either dark grey or off white.  The color is a facsimile of lightly weathered teak material.  The material warranty is 5 years.

My plan is to order up about 10 square feet of the material and give it some wear and tear on the Catalina before I go crazy with the installation. I am concerned how the material holds up, whether it fades, delaminates or gets algae encrusted. 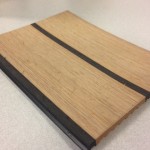 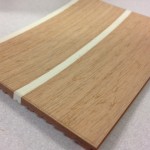 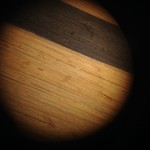 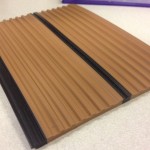