I made a trip over to Ikea to check out some fabrics to see what would go well with the general tone of the interior.  They didn’t have any huge variety but I picked up some samples in brown, tan and off white.  I decided that the tan and off-white work very well. I  didn’t care for the browns at all.  Too dark and nasty looking.

I also took some photos of how the cushions were constructed before returning them so I would have some ideas about how to construct the new ones.  I decided I do like the top in two layers.

I set up the settee table in the main cabin to try to get a feel for the original Craftsman layout. I am sure the boat crawl at the Nor’sea 27 get-together will help crystallize some ideas about which way I want to go with the interior.

The prior owner had installed a couple of cleats and extended the side settee into a wide berth, similar to what Curt did on Journey, but without the fine polish in materials and the convertability.  It was easy enough to take out as the board was just held in with a few screws.  I did find that most all of the trim pieces, fiddles that hold the cushions in place were no longer on the boat.  I just had a short 1′ section, but that gave me a template to use when I make a trip out to Blue Pelican to see if I can find more material.

Next I installed the table, which rides on a big steel clamp attached to the compression post. It’s an awkward arrangement using thumbscrews to clamp the post.  Lots of little dings from every time it has been moved or installed.  It would have been easier to use and much less destructive if they used an overcenter clamp and some delrin or something.  The really surprising part was when I had the table installed I expected it to drop right onto the settee and fill in the space much as the temporary board had done.  this is how any modern RV works, but the table is slightly too large to fit the area, the cushion fiddles would probably have further obstructed it, and its own fiddles create clearance issues.  It’s clear I could optimize this arrangement somewhat.  However I found a really nice Lagun table on eBay that may obviate all this and give me a table that can be used in the cockpit or saloon.

I plan to make a trip over to Ikea just to look at what kinds of materials and cushions they have so I can see what I like by way of interior upholstery.  That’s a separate issue from the layout aspects.

I actually  mean removing the mast from the boat, not losing the mast at sea, if you were concerned!

After cogitating on this for some time I decided the most straightforward place to put a 35 foot mast is on the roof of the garage.  It seems to be a lot easier to shuffle it off the boat onto a few sawhorses spanning the ridge of the garage roof than it is to lower it to the ground and then try to lumber it around the yard, creating a big storage nuisance and knocking over things.

The first step was to clear all of the running and standing rigging.  The mast wiring had (unfortunately) been cut at the tabernacle because the yard monkeys couldn’t get the bolt out of the tabernacle.  They also found it more expedient to clip the tabernacle bolts than to unscrew them.  Anyway…

There were three halyards running through the mast sheaves, which I labeled A B and C.  there was also a fourth loose block which was connected to the front of the masthead and moused with stainless wire.  I believe this was for at the front of the mast.  The A and C sheets were run through the masthead in the same direction. The B sheet went the other way.  I don’t know at this point which was which; it could be that B was for the foresail and A and C were Mainsail and topping lift or something.  Or maybe the topping lift was wire.  I have to look at my old photos and see if I have any details.

All of the sheets are in miserable condition, but I asked the yard to save them so I would have an idea what lengths and sizes I would need.  At least two of them are rope as opposed to any kind of yacht braid.  I got the two halyards that were wrapped around mast cleats loos and ran them one a time through the sheaves after labeling them.  They can only fit through one way because of the splices being bigger than the sheaves.  I also have a shackle for each.

After bundling, tagging and zip tying the lines I stowed them away in the aft cabin and moved on to the standing rigging. I had already removed done of the spreaders prior to the trip so I had just one to deal with. It’s something under an inch at the bolt size. I loosened the bolt and we were able to work out the bolt/spacer combination, but the spacer is hopelessly welded to the bolt at this point, so this looks like more hardware that will need replacement.  I got the spreader off and stored away.  I have the 1″ round spreader poles which I must replace based on their condition. I’d like to replace them with aerodynamic foils.  Curt on Journey used new poles and mounts of the original type and ran a wood pole through the pipe to keep them from crushing.  I bought two nice spreaders foils Craigslist for $65 but would need to find a way to mount them.

The lines to the spreader tangs were loose so those were coiled, zip tied and stored away.  The lines to the upper tangs had to be loosened and removed. The forestay and rearstay lines were removed and coiled.

I believe I have this arrangement of eight wire ropes:

The four stays at the masthead were removed by taking out the cotter pins and pushing out the bolts.  The nut came off the sidestay but I couldn’t turn the bolt so I had to remove the spreader wires from the tang as opposed to taking off the tang.

The antenna was zip tied down tot the mast.

Free of wire and lines the mask wasn’t unbearably heavy but was rather floppy.  Carlos went over to the garage roof and we slid the mast aft about 6 feet to reach him then walked it out about halfway.  it became clear he’d need some support on his side as the mast weight increased, so I passed over one of the blocks, which held the mast temporarily while I went to get the sawhorses.  I passed all three, one at a time up to him.  We arranged the sawhorses across the roof ridge so they were level and got the mast completely off the boat onto the roof of the garage.  The center sawhorse sat about an inch lower due to the roof angle, so we blocked up that an inch with a wood block.  Then we tied the mast to each of the sawhorses to keep things stable. 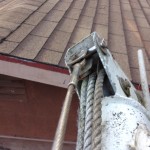 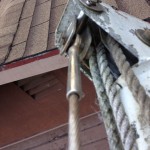 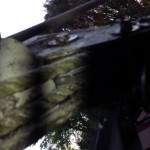 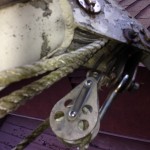 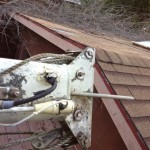 I met Deano in Antioch and bought a few odds and ends from him.  A ships wheel, two bronze 8″ bronze ports and a couple of gauges. From the ad:

MAKE ME A DECENT OFFER AND THEYRE YOURS! I WILL LET THIS AD RUN FOR THE DAY AND ALL ITEMS GO TOO THE HIGHEST OFFER! THESE ITEMS CAME OFF OF A 1926 CINNO BROTHERS YACHT! SO THEYRE CLOSE TO 100 YEARS OLD IF INTERESTED CALL DEANO 925-238-XXXX

I polished up the humidity meter quite a bit with some 225 general purpose sandpaper.  It actually “cuts” less than 500  carborundum paper, which I followed with 1000, then Brasso .  It’s too bad about the clock being converted to digital.  It works and looks fine but the mechanical version had Ships Bells.  I found on eBay they have an electronic movement that has a ship’s bells feature for $130.   I may look at getting one of those if it fits the bezel.

In vintage new condition I see the clock and humidity gauge pair on a Canadian website for $899.

New Stockburger gauges new are about $75 or so but much smaller. 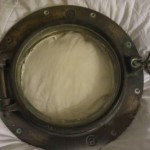 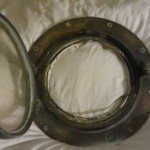 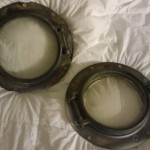 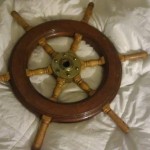 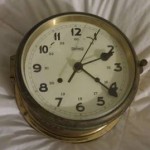 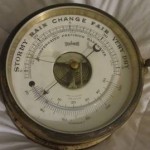 Today I met Dan in Pittsburg, CA. He’s actually a boat wrecker and probably a good contact for the future.  He had two trailers full of Chris Crafts chainsawed into strips, so there wasn’t much in the way of straight lumber and most of it was covered in two plies 3/4″ thick.  There were some big chunks from the transom but they were oddly shaped.

The trip wasn’t a total bust –  I did get several nice varnished mahogany trim pieces 6-8′ long, 4 inches wide and just under a quarter inch thick, a small bundle of teak trim and those may be useful down the road for some purpose. Also to round out the deal he threw in a teak louvered companionway accordion type door with drink holders built into the base.  At least I think they’re drink holders.  They are a pair on both the inside and outside of the hatch so I don’t think they’re for poles!  Maybe it could fit the aft companionway, but that’s a tight squeeze as it is without having to dodge things.

Most of the leftovers were firewood.