I was amazed today to see and advertisement for a Tanbark Jib sail appear on Craigslist, and doubly so because it was for a Nor’sea 27!! Answering the ad, I met up with Bryan, the (relatively new) owner of Vela. Vela spent 16 years in storage in the northwest and its interior is in near perfect shape. Bryan’s spent some time updating the boat, replacing all the standing rigging adding Amsteel lifelines and proper bronze through-hulls.

Stepping aboard Vela at the Richmond Yacht Club was like entering a time machine. It’s a rare opportunity to see a “new” norsea in fantastic condition. The Yanmar 2GM had less than 100 hours on it. Bryan mentioned that at his last haulout when the 2 coats of bottom paint were stripped, folks were asking if his boat was new!

The boat’s a newer 80’s layout that has pristine teak inside and out.  Bryan’s setting off for Mexico in the next week or so, so this was a serendiptitious opportunity. Oh, and I did buy the jib, and expect to put it to great use when my own projects are completed.

I made a trip to Minney’s in Costa Mesa on Saturday and brought home a haul of goods.  I took a wish list with me that had all the critical dimensions.

They had a good price on a Hille-Range propane oven but it was looking a little tired and the door had some rust through on the inside, so I held off hoping Craigslist will turn up another Origo 6000 or Force 10 oven, or something similar.

On the way out we stopped in Long Beach to stop at the Captains Locker, which I was hoping was another consignment place but it turned out to be a well stocked boat supply that sold only new items.  On the way out though I checked out the West Marine at the same harbor to see what they had in the discount section, and there I found a 6″ nickel plated bell, new for $5.17. 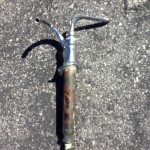 Here’s a pump faucet. Just the chrome part sticks up above the counter 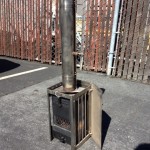 A couple views of the Cole stove here. It has an adjustable baffle on the right side and it came with a stainless steel 3″ stack that has a damper in it. 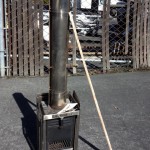 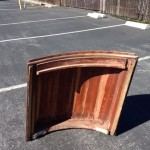 I’m hoping I can take out the screws and square it up with some minor mitering, then recut the ends. I am not sure how well it’s glued up. 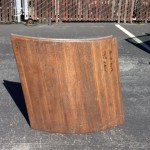 You can see the hatch is a parallelogram not a rectangle. 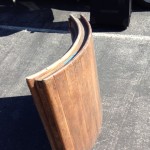 The curve here is pretty glorious. I hope I can adapt them into hatch or companionway covers. 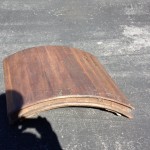 There are two of these curved hatch covers. They are little diamond shaped, not square. 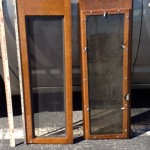 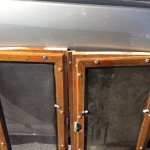 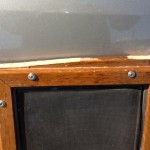 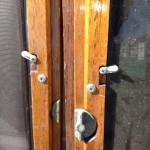 You can see the toggles that are used to hold the screen and/or glass in place and beneath them a nice bronze latch. 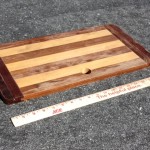 This is a teak and holly cutting board that goes over the top of the stove. I had only the finish dimensions of my Origo 6000 but I figured for $5 it is worth a try. 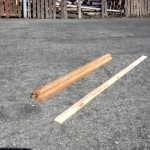 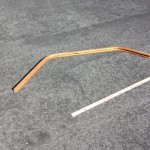 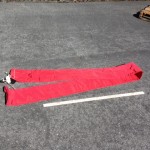 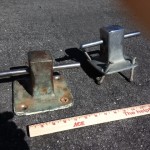 Here are a couple bollards. Both chrome plated bronze. The one on the the right will be shined up a bit and the one on the left will stay salty. There’s some iron rust on it that needs to be polished off, though. 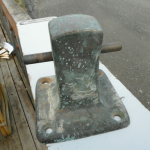 I missed out on the auction of this bronze bollard – it’s one’s nicer but it went for $50 + 17 shipping. 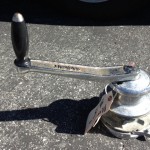 This is a vertical windlass with stacked winch barrel for anchor rode on top and a gypsy for chain on the bottom. The winch handle was separate. I got a big, long nasty Barient non-locking Barient handle for $28. The total was about $132 for the pair. I think the chrome will polish up pretty well, and if not, it’s bronze underneath! 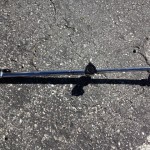 This is just a foot long hatch prop.

After finding this ad on Craigslist, I contacted the seller, Ronnie Simpson right away.  I met him on Wednesday, looked over the motor and made him a cash deposit of $300.  I found out a lot of impressive information on Ronnie over the next few days.  He mentioned he had singlehanded in the Transpac to Hawaii, but he didn’t mention that he had one his class.  I also found he was active in the Bay Area Disabled Sailor (BADS) group, and was a wounded veteran, having been injured by a rocket propelled grenade blast that left him legally blind.

Ronnie and I met on Saturday at his cruiser boat, a Cal 2-27 berthed in Alameda.  We spent most of the day pushing the engine out through the small access port in beneath the galley, then up through the companionway using a hoist connected to the boom, and we plopped it on a dolly.  Ronnie had the engine fully disconnected when I arrived, but we wound up having to remove most of the motor mounts, the alternator, starter and fuel filter before we could get the motor free.

In the course of removing the starter we found the reason for the grinding noise was that the starter housing had basically exploded.  The hope was this was the extent of the problem and a new starter might get the motor back on its feet.  Ronnie also mentioned that the engine did leak oil and suggested at least replacing its seals.

We loaded the boat into my 2000 MPV van.  We had to dump about $50 worth of diesel in the recycling because it was sloshing around too much.  I came away with a nice Racor fuel filter, a raw water filter, 10 gallon aluminum tank and filler, as well as the electronics harness and panel for the Yamar 2GM.  Ronnie’s going to work with a diver to get the driveshaft and propellor out and then contact me for pickup.