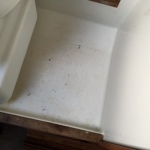 Seen from above: The molded-in shower pan on the right is flat but slightly beveled for drainage

The Nor’sea 27 sailboat (most models) has a fiberglass liner in the head area that has a raised molded-in platform on its aft edge for the head installation, leaving a slightly depressed section on the right as a molded-in tray. Some owners have plumbed in a handheld shower and installed a drain in the tray, which tilts to the front left edge.  I haven’t gone that far, but I thought it would be great to have a teak floor to protect the gelcoat in this area, which is prone to water and wear.

For that reason, I’ve been carrying around the rough measurements in case I ran across something promising. 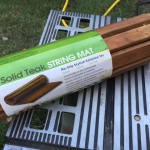 At the 2013 Strictly Sail exposition in Oakland, California, I bought a teak string floormat for about $40. When rolled out flat the mat measures about 19-3/4 inches on a side, and is made of plantation teak. They’re called “string mats” but in fact, the strings are stainless steel cable on the good ones. The interesting thing is that the flexibility of the construction will lets it conform somewhat to shower pan, which isn’t exactly flat, sloping slightly up at its edge.

I located the same mat later at Bed, Bath and Beyond

for about $60, at retail. It’s made by WaterBrands.They also sell a rigid mat, but as it turns out, The rollup mat is the way to go. 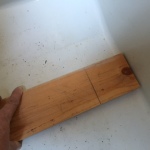 The first step in any installation is to measure very carefully because, I’ve learned in the past, nothing on a boat is typically exactly what it seems. In this case the fiberglass shower pan is mostly square, but it tips up on the port side of the boat a little to meet the hull. The string mat has a advantage of being able to conform to that rise nicely.

I measured 18-3/4 inches width overall and found it was consistent across the pan, but I noted that there is a slight radius to the corner edge, just about a 16th inch on each side, so I narrowed it to about 18-5/8″ The first thing I did was cut a piece a pine of that size test it out. It fit well in the middle center and top with about a 16th inch gap on either end. That’s about what I wanted; I could fit in there more perfectly if I coved the inside edge of the corner, but I do want to get a little bit of circulation around each end to help prevent rot. 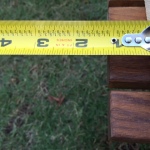 Using the wood I trimmed as a guide, I lined it up with a mat and found that I would need to trim 1″ but because of the location of the cables just a couple inches from each end I would need to cut both ends of the mat at 1/2″ to avoid leaving one of the stainless cables too close to the end. 18 5/8 inch length was just a touch wider than my tablesaw fence could accommodate with stability so I used an extra clamp to square things up. As I cut each piece of the mat tended to kick back some with some four so I was careful to position myself out of the line of fire. 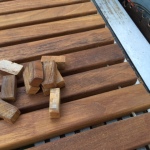 Next I flipped it over and cut the other side. I was able to cut fairly cleanly without much chip out.  There were some slightly rough edges to touch up with sandpaper, but I wanted to check the fit first. 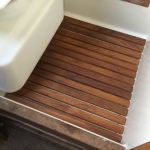 I went ahead and test fit the mat in the bottom of the floor pan, and actually couldn’t have had a better fit. Moving the mat left or right causes it to ride up on the 16th inch radius so it’s really happy with that kind of spacing I provided. 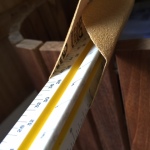 Next I had to finish the ends a little bit so I wrapped a piece of adhesive sanding disk around a triangular ruler and use that to smooth the corners between pairs of the boards. I also around the edges just slightly on top and bottom those 12 boards are so makes for a lot of edges and sides. 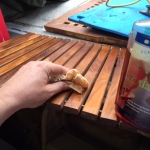 Next I used some teak oil and a rag to treat the newly cut surfaces. The end cuts of the boards really soak up the oil. I went ahead and gave the rest of the mat a light oiling. 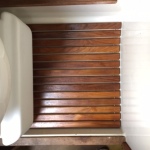 The last photo shows the mat oiled and installed in the boat. It really makes a big difference in the appearance, and the teak boards will help protect the fiberglass gelcoat from scratches.

A few months ago, even before I went out to get the boat I was able to get a stack of Nor’sea cushions from Dan, owner of Merilee in Sausalito.  Although the color isn’t ideal they will let me evaluate the potential of an upgrade of my boat to the newer layout.  I have the earlier, more traditional fold down board.

I tried test fitting the cushions.Cockpit cushions didn’t look very close to Aft berth dimensions. The main cabin cushions could work, but the color is really horrible. May try some RIT due to turn them dark purple or brown or anything. The forspeak locker is much bigger. I’m willing to give up the nav table but would like to keep thehanging locker and stove. Maybe the hanging locker could swap sides.

Unfortunately the Merilee’s cockpit berth cushions aren’t very close fits for the Aft Cabin.  Although, I may be able to use the foam somehow. 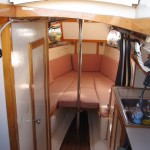 This was the original cushion arrangement on Merilee 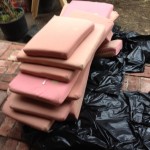 This the stack of backrest cushions from Merilee, about 1/3 of the total cushion volume. 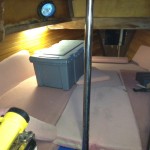 Looking at the port side forward 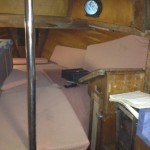 Looking forward at the cushions on the starboard side

In reviewing some photos of other boats I it occurred to me that instead of being varnished wood, the cabin ceiling could be painted white, and this would address some of the water stains and simplify the restoration after the leaking deck hardward has been rebedded.

Wood putty and paint could be used where it would otherwise have been necessary to strip out and replace a lot of the finish material.  It’s quicker, less expensive, and the resulting white ceiling would have a lighter, more open feel.  I will need to give this some thought because I really do like the look of the wood cabin top. 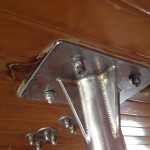 The compression post has some discoloration from leaks around the mast step. 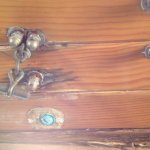 There are numerous water stains around deck hardware bolts in the ceiling. The deck hardware needs to be rebedded, but the wood would require replacement, …or would it? 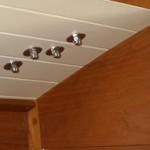 A relatively easy fix for all this is to sand, fill and paint the ceiling. This is as compared to removing the ceiling and replacing all the stained boards, with the risk that new leaks could appear later.

I woke last night, just after midnight, to the sound of a thundershower.  I pulled on a jacket and ran out to close up the Nor’sea: six ports, two hatches, rear drop boards and close the main companionway doors.  The main doors actually closed shut with just a little effort, which was interesting because they had been unable to close fully since I picked up the boat last month.  Something seems to be stabilizing or un-swelling, which is good.

Deciding on the Main Cabin Layout:

I went through some photos of Plume today to get an idea how significant a redesign of the original Nor’sea interior would be, and it actually looks do-able.  If I get some basic measurements I may even be able to pull off a reasonable facsimile of the newer interior.  With some minor differences I will point out, the original interior forward of the compression post was pretty similar to the new one.  The differences are primarily forward.

Removing the Nav table that occupies the port side of the original layout:  It’s a different era of navigation, and unless you are a luddite, the time spent at the sit down chart table is pretty small. You’re more likely to be in front of a laptop, or perhaps even in the cockpit with a tablet or GPS Chartplotter.  Paper charts certainly have their place but dedicating a significant portion of the interior to one simply no longer makes sense.

Replacing the fold down V-berth extension with the dual Settee creates a much more open design.  Some cruisers are very fond of the fold-up because it lets you leave the bed in place indefinitely but there is a big difference in available space.

Going with the new design would mean 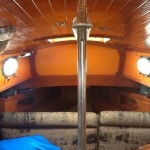 The bench seat of the traditional layout divides the seating area athwartships just past the compression post. The V-berth remains separate 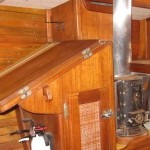 Nav table of the traditional layout is attractive, but less functional in the era of GPS chartplotters. 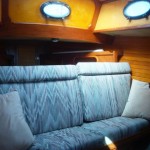 The traditional layout has a single large bench athwartships and a smaller bench at left along the port side. 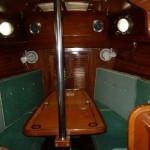 The revised layout has two parallel benches, sometimes curved into a full inverted U. 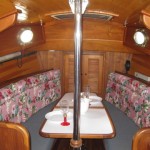 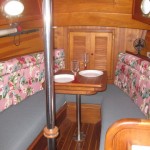 New layout with the table folded 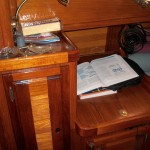 New layout – port side view with hanging locker and some kind of side table. 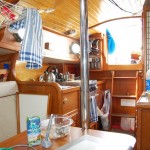 New layout looking back from the seating area. No Nav bench at left. Cabin heater is over on the right side.